7 Simple Ways to be More Organised Every Day

Organised. A label not normally thrown my way.

In my mind, organised is synonymous with perfect. I know I’m not perfect. So, it follows I’ll never be organised.

If you’re also struggling with this concept, create a new vision of what being organised really means, too. It’s not all about pretty folders, labelled jars and perfectly filed papers. Letting go of those misconceptions is a great way to begin the journey to being organised.

Over the years, I’ve spent plenty of money on organisation stuff. Boxes. Files. Jars for the pantry. Shelves for the bathroom. The truth is, it just added to the clutter because in the end, I could never keep everything organised and filed away perfectly.

Then I stopped trying so hard.

This is what I learned: 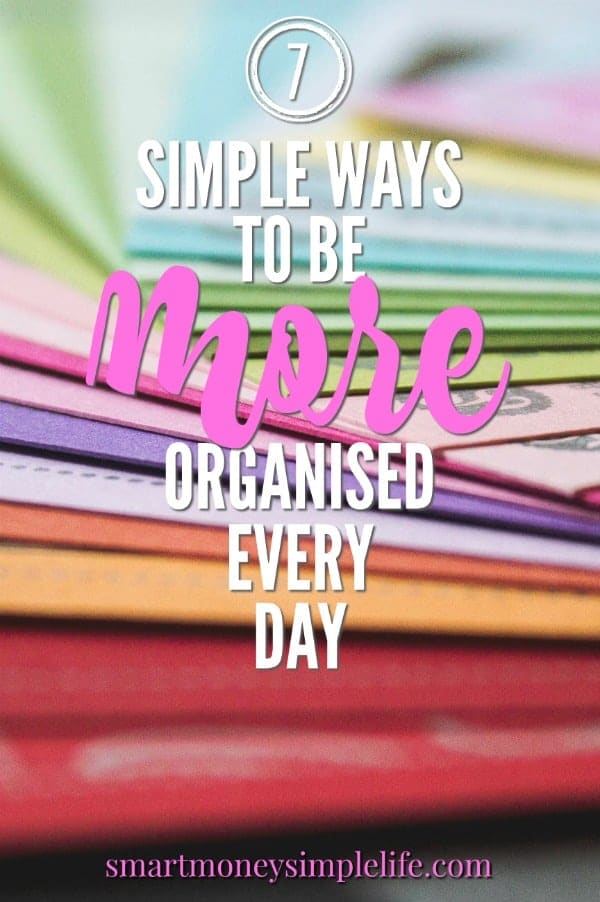 Yep. I’ve been a sucker for that notion for a very long time. Perfectionism is a dreadful malady that sucks the joy out of your life and invariably leaves you sitting in the middle of a pile of stuff. Perfectionism is undoubtedly the root of all procrastination because, lets face it, what’s the point in doing it if it’s not perfect? Right?

Once you switch from thinking perfect to thinking more, you free yourself from the pressure of perfectionism.

Organising is not something you do once

Even the systems you create wont be a one time thing. You’ll discover they need tweaking as you learn to fit them into your daily life. And, it’s much easier to fit your organisational system to your current routine than it is to force a major overhaul in your life.

Good or bad, our habits exist for a reason. Work with them as much as possible.

Remember point one; there’s no such thing as perfectly organised.

There are no quick fixes

If you’re serious about being organised you’ll need to face the reality that there are no quick fixes. Unless of course, you throw everything out and start again. Not really an option for the majority of us!

However, being organised is much easier if you have less stuff. Culling your clutter is probably the hardest part of the process of becoming more organised. Do that first, and the rest of your organisational efforts will be much easier.

Maintaining your organised space will be much easier, too.

You don’t need to have the tidy gene

Not having the tidy gene was always my excuse for my space being a disaster. The truth is, having the will or desire to be organised is more important than anything else.

That means those of us without the tidy gene need to tackle the process from a different angle. We need to apply our will to the task in short bursts.

I get distracted. A lot. So, when I’m faced with a task for which my natural affinity is zero, I do it in 20 minute blocks. This allows me to get the work done and have an intentional distraction break.

There’s no need for special stuff

At least, not immediately. That’s because, until you’ve culled all your clutter and know what’s important, what you need to have readily available and what can sit in a cupboard until you need it, you have no idea what organising stuff you’ll actually need.

Remember, getting organised is not a once off deal, it’s a process. You’ll need some time to figure out what works for you and how best to arrange your stuff.

Then you can hit IKEA or the Container Store with a plan.

You get more done when you’re organised

I’m a visual person so I like to be able to see what I’m working on.

Often times, this has meant files and papers for every project on my desk at the same time. I (mostly) knew where everything was and could (generally) lay my hands on exactly what I needed, when I needed it… But, no one else could. To everyone else, my work space looked like a filing cabinet had exploded.

Now, I have a visual planner on my wall with each project and its tasks laid out so a glance is all I need to check in with where I’m at, work-wise.

I can’t begin to tell you how this one change to the way I organise my work has changed my life.

Getting (and staying) organised doesn’t have to be a hassle

If you create your organisational systems to work with you and your natural tendencies rather than trying to fit yourself into someone else’s system, you’ll find it a lot easier to stick to.

Like my visual planner, use what you know about yourself to your advantage.

Also, make it easier to keep the clutter out. Don’t let junk mail through the door if it’s just going to pile up. Put a ‘No Junk Mail’ sticker on your letter box or put junk mail straight into the recycle bin without letting it touch any other surface.

What else can you remove from your daily routine that creates clutter?

Can you swap to digital bills and bank statements?

Always remember, being organised is a process and the less you expect perfect, the easier it will be to create more organisation in your life and your home.

What gems of wisdom have you discovered in your journey to a more organised existence?

Diane is the founder of Smart Money, Simple Life, a website dedicated to sharing information and inspiration for those seeking a simpler and more frugal life. And... Adores cats, hates housework and is an INFP.

What Could You Do if Money was No Object?

6 Simple Rules for Being More Frugal AND...

5 Tips for Buying Your First Home

The Ultimate “How To Save” on your Work...

What Matters Most? Figure that out and everything...

Good post. Being organized makes life so much better. I have found that eliminating clutter has been one of the best things I can do to improve my finances as well. Thanks for the tips

Thanks Kristal. Yes! Clutter!!! Life is so much easier without it. 🙂

I came across your blog via Pinterest today. We seem to be on the same path.
Lots of great advice.
Ann

And what a path it is! There’s always more to learn. 🙂