We’ve all had them, haven’t we? One of those days… The days when it seems nothing’s going quite right.

Money is tight. You don’t know if you’re heading in the right direction. You’re not sure if what you’re doing is working. Or, all that, plus you burned the bottom of the pan when you were heating up your potato and leek soup for lunch. Yep… I burned my lunch.

Your version of one of those days might look completely different to mine but we know them when we see them. So, when your day (or week, or month) has been a bit like mine, you have a couple of choices: give in to the frustration or look for something to snap you out of your narrow mindset.

The trick is to turn your thinking around before it gets any worse. You can meditate or focus on gratitude or, you can spend some time looking for inspiring quotes, like I did.

Here’s a relatively random list of inspiring quotes if you’re a little bit stuck in the struggle phase and need to be reminded that staying focused, staying on task and believing in your goal are the keys to achieving your goal – whatever it might be. So, I hope you enjoy reading these quotes as much as I did gathering them.

Inspiring Quotes to Keep You Motivated

Unless you’re willing to have a go, fail miserably, and have another go, success won’t happen.Phillip Adams

There is no greater agony than bearing an untold story inside you. Maya Angelou

He who wrestles with us, strengthens our nerves and sharpens our skills. Our antagonist is our helper. Edmund Burke

It takes 20 years to make an overnight success. Eddie Cantor

The tragedy of life is not so much what men suffer, but rather what they miss. Thomas Carlyle

Most of the important things in the world have been accomplished by people who have kept on trying when there seemed no hope at all. Dale Carnegie

A man who has committed a mistake and doesn’t correct it is committing another mistake.Confucius

It does not matter how slowly you go so long as you do not stop. Confucius

If you shoot for the stars and hit the moon, it’s OK. But you’ve got to shoot for something. A lot of people don’t even shoot. Confucius

When it is obvious that the goals cannot be reached, don’t adjust the goals, adjust the action steps. Confucius

How you think when you lose determines how long it will be until you win. Gilbert Keith Chesterton

Success is the ability to go from one failure to another with no loss of enthusiasm. Winston Churchill

Criticism may not be agreeable, but it is necessary. It fulfills the same function as pain in the human body. It calls attention to an unhealthy state of things. Winston Churchill

It takes courage to grow up and become who you really are. E.E. Cummings

It’s kind of fun to do the impossible. Walt Disney

The measure of success is not whether you have a tough problem to deal with, but whether it’s the same problem you had last year. John Foster Dulles

It’s not that I’m so smart, it’s just that I stay with problems longer. Albert Einstein

Anyone who has never made a mistake has never tried anything new. Albert Einstein

It is never too late to be what you might have been. George Elliot

The best years of your life are the ones in which you decide your problems are your own. You do not blame them on your mother, the ecology, or the president. You realize that you control your own destiny. Albert Ellis

Don’t be too timid and squeamish about your actions. All life is an experiment. Ralph Waldo Emerson 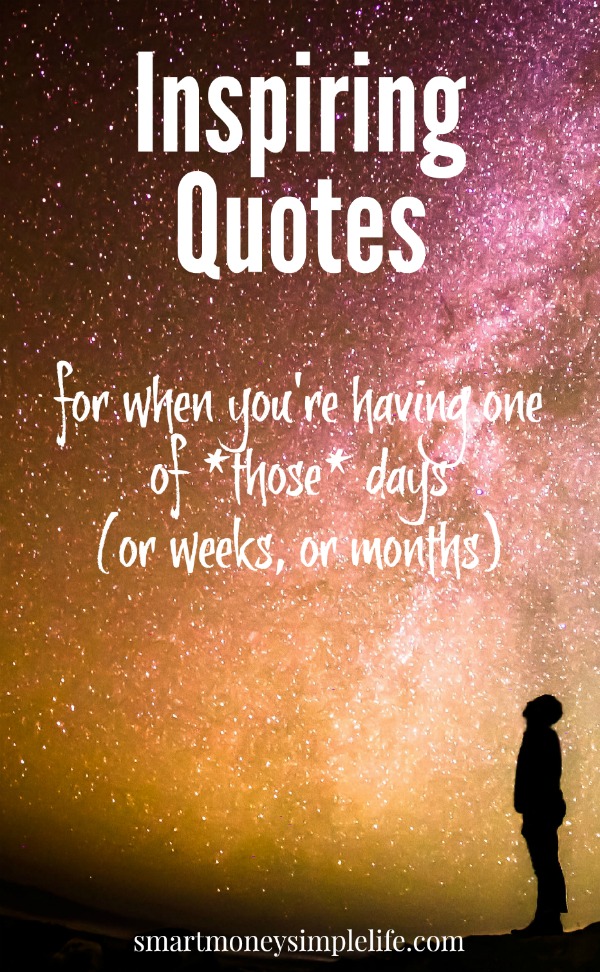 Finish each day and be done with it. You have done what you could … Tomorrow is a new day; begin it well and serenely and with too high a spirit to be encumbered with your old nonsense.Ralph Waldo Emerson

The first principle is that you must not fool yourself, and you are the easiest person to fool.Richard P.Feynman

Don’t worry about failure. Worry about the chances you miss when you don’t even try. Sherman Finesilver

Failure is success if we learn from it. Malcolm Forbes

History has demonstrated that the most notable winners usually encountered heart-breaking obstacles before they triumphed. They won because they refused to become discouraged by their defeats. B.C. Forbes

There isn’t a person anywhere who isn’t capable of doing more than he thinks he can. Henry Ford

Anyone who stops learning is old, whether at twenty or eighty. Anyone who keeps learning stays young. Henry Ford

What man actually needs is not a tensionless state but rather the striving and struggling for a worthwhile goal, a freely chosen task. Viktor E. Frankl

You can achieve anything you want in life if you have the courage to dream it, the intelligence to make a realistic plan, and the will to see that plan through to the end. Sidney A. Friedman

To die is poignantly bitter, but the idea of having to die without having lived is unbearable. Erich Fromm

Man’s main task in life is to give birth to himself, to become what he potentially is. Erich Fromm

A great pleasure in life is doing what people say you cannot do. Walter Gagehot

We must get our hearts broken sometimes. This is a good sign, having a broken heart. It means we have tried for something. Elizabeth Gilbert

Vision is not enough. It must be combined with venture. It is not enough to stare up the steps; we must also step up the stairs. Vaclac Havel

Before the beginning of brilliance, there must be great chaos. Before a brilliant person begins something great, they must look foolish in the crowd. from I Ching written by Fu His

The greatest mistake you can make in life is to be continually fearing you will make a mistake.Elbert Hubbard

Security is not the meaning of my life. Great opportunities are worth the risk. Shirley Hurstedler

Most people never run far enough on the first wind to find out they’ve got a second. Give your dreams all you’ve got, and you’ll be amazed at the energy that comes out of you. William James

Great works are performed, not by strength, but by perseverance. Samuel Johnson

Things don’t go wrong and break your heart so you can become bitter and give up. They happen to break you down and build you up so you can be all that you were intended to be. Samuel Johnson

When the facts change, I change my mind. What do you do, sir? John Maynard Keynes

Certainty is a cruel mindset. It hardens our minds against possibility. Ellen Langer

There is always a step small enough from where we are to get us to where we want to be. If we take that small step, there’s always another we can take, and eventually a goal thought to be too far to reach becomes achievable. Ellen Langer

You are never too old to set another goal or to dream a new dream. C. S. Lewis

Challenges are what make life interesting. Overcoming them is what makes life meaningful.Joshua J. Marine

Always do your best. What you plant now, you will harvest later. Og Mandino

Dreams don’t work unless you do. John C. Maxwell

It is hard to fail, but it is worse never to have tried to succeed. Theodore Roosevelt

Everybody dies, but not everybody lives. A Sachs

A genius! For 37 years I’ve practiced fourteen hours a day, and now they call me a genius! Pablo Sarasate

There has to be this pioneer, the individual with the courage, the ambition to overcome the obstacles that always develop when one tries to do something worthwhile that is new and different. Alfred P. Sloan

You may have to fight a battle more than once to win it. Margaret Thatcher

Try a thing you haven’t done three times. Once, to get over the fear of doing it. Twice, to learn how to do it. And a third time, to figure out whether you like it or not. Virgil Garnett Thomson

Twenty years from now you will be more disappointed by the things you did not do than by the ones you did. Mark Twain

Only he who attempts the absurd is capable of achieving the impossible. Miguel Unamuno

To avoid criticism, do nothing, say nothing, be nothing. Unknown

When the world says, ‘Give up,’ Hope whispers, ‘Try one more time.’ Unknown

Every accomplishment starts with the decision to try. Unknown

No problem can withstand the assault of sustained thinking. Voltaire

The only true failure lies in the failure to start. Harold Blake Walker

Whenever an individual or business decides that success has been attained, progress stops. Thomas J. Watson

The very best thing you can do for the whole world is to make the most of yourself. Wallace Wattles

Failure is not fatal, but failing to change might be. John Wooden

Success comes from knowing that you did your best to become the best that you are capable of being. John Wooden

Nothing will work unless you do. John Wooden

I’ve tried to settle on a favorite but I can’t. They are all great quotes and I can definitely connect with the message that you have to be willing to take risks if you’re serious about pursuing your dreams.

Yes. It can be scary and you’ll be tempted to throw in the towel, often, but even if you don’t achieve all you hope to, you’ll achieve far more than the person who never risks making mistakes or looking foolish. The rewards will be worth it.

I plan to keep revisiting these quotes until one hooks me, then I’ll put it up on my planner so I can see it all the time.